Our brain on "OM"

Even people that are not completely familiar with a Mantra and its use may have heard of the Mantra "OM".

Om is a well-known single-syllable mantra, or bija (seed) mantra. Bija mantras are thought to contain creative power and primordial energy, like a seed contains a tree.

There is a vast science of sound in yoga used for increasing awareness and expanding emotional states and "OM" is a primary Mantra in these practices.

The default network of the brain is responsible for thoughts when you’re left alone and undisturbed. You might know it as your "busy mind" when you're sitting there without anything to do, or you are bored. The default mode network is linked to your mind wandering, thinking about your past, wondering about your future, and imagining about what others think of you. Sound familiar? For most people it does.

Repeating simple mantras turns down this network, this helps explain the calming effect of mantras.

Why is "OM" so powerful?
A sensation of vibration is experienced during audible ‘OM’ chanting. This has the potential for vagus nerve stimulation through its auricular branches and the effects on the brain thereof. The neurohemodynamic correlates of ‘OM’ chanting are yet to be explored.

Neurosince has explored the impact of Mantras on out brains. One such study exampled the impact nad benefots of "OM".

The neurohemodynamic correlates of ‘OM’ chanting indicate limbic deactivation. As similar observations have been recorded with vagus nerve stimulation treatment used in depression and epilepsy, the study findings argue for a potential role of this ‘OM’ chanting in clinical practice.

Compared to REST, ‘OM’ chanting produced deactivation of thalami (A) and limbic structures - anterior cingulum (B), hippocampi (C), insula (D) and parahippocampi (E); Whereas control condition ‘ssss’ produced no deactivation in any of these regions (F). The color bar represents the T scores given in the table below. 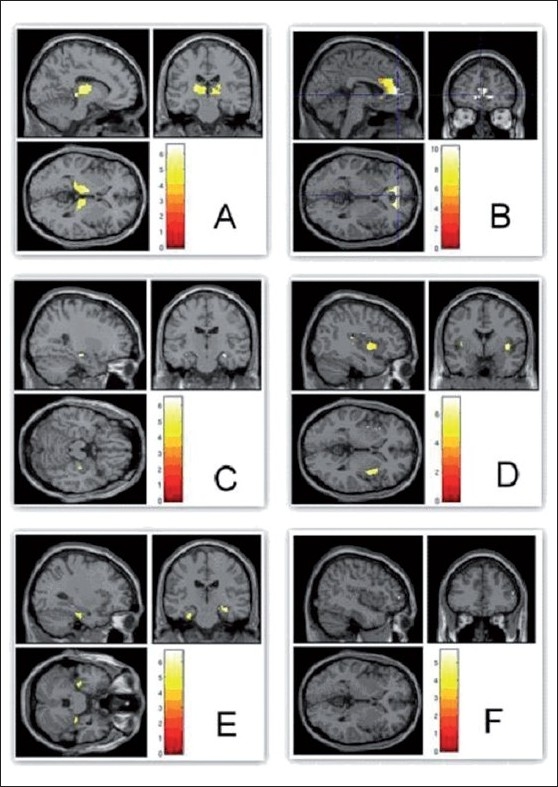